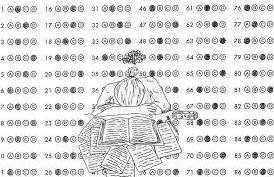 A grassroots movement is sweeping the nation, yet hardly anyone is talking about it is The “Opt Out” Movement, which started in New York State. Since 2002 legislation made standardized testing mandatory to receive federal education funds, states have been testing students grades K-12.

In New York parents have begun “Opting Out” stating that their children simply would not be participating in state standardized assessments. In 2018 nearly one in five students did not participate in the common core assessments.

So Why Are Parents Opting-Out?

A decade after Common Core standards and assessments were implemented American students is still lagging behind other nations. In some areas student growth has remained stagnant or shown very little improvement. Across the nation schools began teaching to the test. Teachers felt such immense pressure for their students to excel that they began skipping extra curricular lessons and even science and social studied to focus on reading and math. Schools began implementing practice exams where students would be subjected to additional testing to see where they were and how far teachers had to push them. Anxiety of both teachers and students were heightened with little progress to show for it. Problems like these contributed to the growth of the Opt-Out Movement. Many parent feel that Test-Prep is a district obsession and that students are not receiving opportunities for authentic learning.

In my opinion state standardized test do not show a students actual abilities. As an adult with Dyslexia and test anxiety I tend not to do well on exams. I have a whole series of exercises I have to run through just to be calm enough to sit for an exam, understand what I have read, and not let my anxiousness allow the symptoms of my disability surface. When I am stressed or anxious I begin to reread sections or sentences I have previously read, and skip parts of a sentences or paragraphs making my anxiety level rise and my ability to comprehend impaired. Over the years I have developed techniques that allow me to take exams successfully. I know if this was my child experiencing the levels of anxiety I would Opt-Out of state standardized testing as I feel mental health is more important than subjecting my child to an exam that would not clearly demonstrate their abilities.

Testing is being misused/overused in this nation and it is destroying public education and puts school in low-income areas in risk of closure or privatization. These types of test do not reflect the abilities of students of color, English language learners, children with disabilities, and low-income youth. Many others with test anxiety do not test well.

While schools need to be held accountable to provide a quality education there has to be a better way.

FairTest’s Resistance Guide offers links to a variety of information about other actions you can take to push for less testing, more learning and better assessments. http://www.fairtest.org/get_involved

The Main Differences Between Equity & Equality
Three ways to create Equity in the Inclusive Classroom
A Closer Look at an Organization’s Policy Regarding Equity, Equality, & Equal Opportunity